My 4 year old is SUPER HERO obsessed!  Not sure whether I should "blame" the Avengers, my hubby or just the fact that he is male.  There is something super cool and super powerful about a superhero.  My lil' guy is pretty sure a superhero can fix anything!  The other day, he asked me for a cape....I started thinking and came up with a trashbag cape!  Super easy, cheap and already had the stuff...done!

**Of course with any cape, make sure your child is supervised so they dont choke/eat/strangle, etc.**  Thanks!


Ok, so I grabbed a black trash bag out of the garage and cut through the top seam (where the yellow inner ribbon is, so where the bag ties shut when full).  I cut down to basically cut through the seam and pull out the inner ribbon (ours was a yellow tie).  Then, I removed the tie altogether and tore the bag down each side seam.  It came apart very easily, but if yours doesn't just by tearing you could always cut on the line.

Now, you should basically have a long, flat rectangle.  Cut the trash bag in half at the line that was the bottom of the bag.  Now you have two matching rectangle pieces.

Thread a piece of elastic through the loop where the trash bag ribbon was...

TADA!!!  CAPE!
Decorate as you wish, we were SuperBLAKE until I was told that was uncool and he was "just Batman"

Going on a week now...and he STILL loves it!
**and yes, I did trim it so that he wasn't tripping and it was less dangerous**

love it, hate it

My big Bee was always a great napper!  He just loved to nap!  He stayed at a once a day, three hour nap from about a year until just about 4 years.  At that point, he would still nap like a CHAMP, but bedtime was drawn out...he would go to his room around 730-8 but be awake talking and playing until 10 or 1030.  It was stressful and gave me and hubby no time to watch tv or have any down time together.  I talked to his Dr. and he confirmed my fear that it was probably time to switch Big Bee from "a nap" to "quiet time".  He still needs some down time, but this way he would be tired enough to GO.TO.SLEEP at a decent time still. SO, we began the transitional journey.  At first, he would need a nap maybe every few days but for the most part did great!  He has now been on this new schedule for about three weeks and for the most part, I LOVE it!  (now, today when I really wanted a shower and took it during "quiet time" only to get done and that pretty much ate up all of my time, it was a bummer BUT bedtime will come and I will be doing summersaults!)  SO, anyway we have offered Big Bee a few suggestions of things he could do to stay awake at quiet time.  He has his birthday present from his 4 year old Birthday (his Frog and Fish, Zack and Gack) in his room and so his favorite thing to do is to watch them swim and "play".  Other than that, he has a wide selection of books to look through, his Innotab, and Leap Frog Tag system.  He also likes to take a few toys in his room and play with those some days.  Today, it was a modge podge of his new favorite toy, pellet balls (aka penguin food), his toy penguin and some playdough to play on a makeshift table...I walked in about half way through quiet time and asked him what he was doing...

"mom, I am having a Penguin Party".

I will be looking for other fun, good, quality, quiet time activities, because Big Bee, well, he will fall asleep if I let him just lay in there for a bit with books...come on Pinterest!

Sorry I have been MIA the past few weeks...ambulance ride, 3 ER trips, 4 day hospital stay all for little Bee, trip to NM with the in-laws, little Bee's first birthday, big Bee's 4th birthday and a broken colar bone are the culprits!

here is a sneak peak of what I've been up too...

So, that is what we have been up too...sorry I have been missing!  Two more birthday parties for Big Bee (a friend and a family) and then life will get back to normal!

Bath time water balloons??? Why not?

Bag of balloons left on the counter after yesterdays number recognition game + bath time = FUN filled morning in the tub with water balloons! 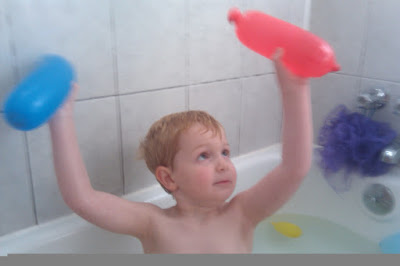 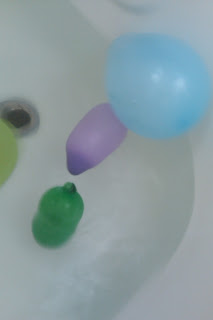 Some sink, some half sink, all are fun to play with in the water and I even blew a few up to float around...great way to talk about float vs. sink

Today, I was looking around for something to do with the kids and we are working on learning what numbers look like right now with big bee...I ran across a baggie of old balloons...one thing lead to another and here ya have it!

Get a sharpie and some balloons (small works great)

I got a piece of scrap paper and wrote all the numbers on it and then picked
one out at a time and "called it", big bee would find that balloon

My initial thought was to have him POP it...but that is harder than I thought!

**Now, I knew Blake could handle big scissors and I was watching him the whole time** so use scissors if you wish (or trust your kids) or they could just capture that # and put it in a laundry basket, etc.

He LOVED making them pop!

While we were rolling around the floor hunting for the right number, static was created and turned into this FUN game!

concentrating really hard to make a static one!

A few FUN bug facts to share with your kiddos today!

B and I were reading a book on insects this morning and I could NOT believe the facts I learned!  Here are  few we thought were super cool!

Holy bananas!  Hubby said tonight that Daylight savings time is already this next week?!?!  That can't really be true?

I know today in CO was B.E.A.U.T.I.F.U.L!  We worked on all things bugs and talked about spring and all the crawly friends that come out!  We made our crafts for the Bug Kit and took the first of hopefully many, many family walks this summer!

Here is the Bug Craft Kit!

Order a BUG kit today and spend some time creating fun creatures with your lil' bug!

I started this company because I am passionate about the time we spend with our children. We as parents, are our children's first teachers and from birth to age 5, children learn at an incredible rate..why not prep them with tools that will make the most of this time, all the while being hidden by giggles and special time with you? Keep in mind, we also provide customized kits that can center around your child's particular interest or birthday party...kids really do learn better when they are intrigued!
Happy Learning, Happy Loving!